Several weeks ago, during one of the investigations, I needed to triage a few potentially malicious Windows executables. One of them caught my attention - a .NET binary located in a seemingly legitimate subdirectory under Program Files. At the same time the file was obfuscated (based on a quick look at FLOSS output) and according to VirusTotal it was detected as “potentially malicious” by several antivirus products. Well, I thought, even if the file turns out to be non-malicious, there must be a reason for it to be obfuscated. Oh boy, how little did I know…

I opened the file in dnSpy and immediately encountered first obstacle - code was obfuscated with SmartAssembly. Fortunately, de4dot did all the dirty work for me and within seconds I was left with a compact code consisting of several classes. I quickly located main part of the program and realized that I am likely dealing with some kind of loader – part of the code was responsible for reading, decrypting and parsing data from two RT_RCDATA resources.

After poking around a little bit more I found a method that was responsible for creating a new PowerShell runspace and executing PowerShell code retrieved from a previously decrypted resource. I was aware of the tools like p0wnedShell making use of exactly same method to “execute PowerShell code without running powershell.exe” so I thought that I am finally onto something.

At this stage, I just wanted to get my hands on a decrypted PowerShell code as fast as possible. Using CFF Explorer I exported RT_RCDATA resource content to a file. Then I copied C# code responsible for decryption from dnSpy window and pasted it to LINQPad. I also needed to make a few small adjustments to the original code to read the content of the resource from a file and pass it to decryption function. 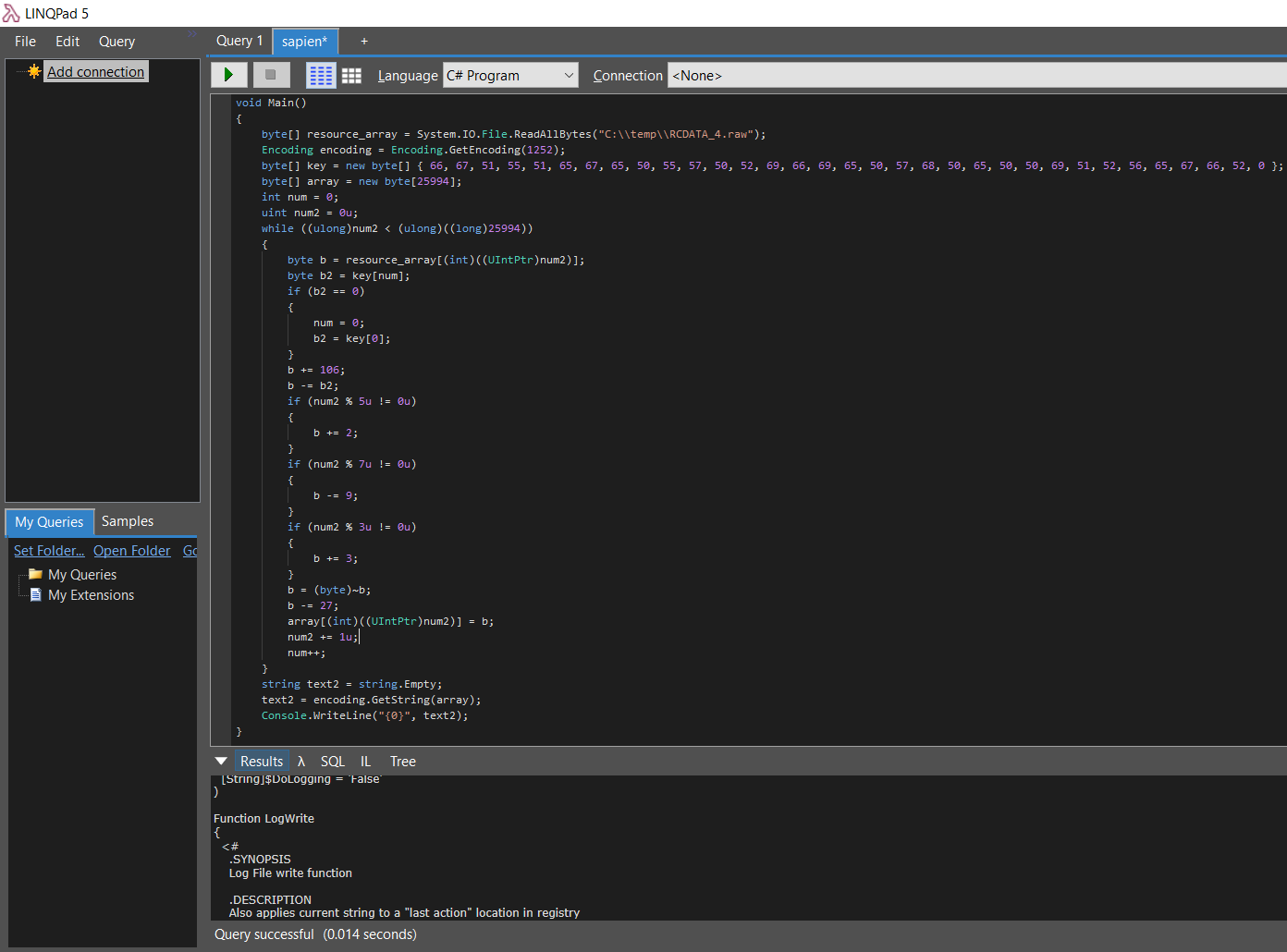 The code worked well but what I got back was not exactly what I expected. It was still a PowerShell code but it did not look like Invoke-Mimikatz or other offensive module that I knew of. Instead, I was looking at a rather ordinary script written by someone to manage software and patch installation on the workstations. All that effort for nothing? What a disappointment!

One last thing I wanted to figure out was the reason why someone made an effort to package a simple PowerShell script in this way. Was it a custom made packer? Or maybe the file was generated by some tool that I was not aware of?

I took a bunch of unique strings from the analyzed binary and fired up my favorite search engine. I quickly realized that analyzed binary was likely generated using SAPIEN Script Packager - available in products like PowerShell Studio or PrimalScript. Following this path I also found out that I was not the only one to encounter scripts packaged this way:

That’s all sorted out then, my investigation was over – or maybe not?

Judging by the fair amount of posts on the SAPIEN Forums their products seem to be quite popular among developers and administrators. Following my “failed” investigation I started wondering if they are also popular among malware creators? Let’s take a brief look at some of the SAPIEN Script Packager capabilities:

On top of that, the SAPIEN PrimalScript script packager supports many more “engines”, allowing users to package not only PowerShell scripts but also:

After learning about all these features I was almost sure that there must be some malicious PowerShell scripts packaged this way (spoiler: I was not wrong). I came up with this simple plan:

First step went smoothly thanks to Malware Hunting capabilities offered by VirusTotal. I initially created a really basic YARA rule for Retrohunt which resulted in approximately 230 samples and additionally gave me steady influx of 1-3 samples per day when applied to newly uploaded files.

The second step was when things started going south. While ExeToPosh worked really well for some of the collected samples it failed to extract data from the rest of the files. I did not want to reverse SAPIEN’s products (the license explicitly prohibits it anyway) so I ended up analyzing 20 or so samples. After several long evenings I knew exactly what was wrong. The files were generated by a different versions of Script Packager - and while mechanics did not change much between versions it was the small things that made a difference.

Here is what I learned about collected executables generated by SAPIEN’s Script Packager:

In order to facilitate all of the above options and to speed up the analysis of several hundred samples I decided to create my own tool to statically analyze and extract embedded data. You can find the script on Github. It works well for samples that I have collected but taking into account the variety of Script Packager versions and packaging options it may fail miserably in certain situations.

After running all collected samples through my script I ended up with a log file containing more than one million lines of scripts (mostly PowerShell) and metadata.

…Everything is forgotten (Unless you upload it to VirusTotal)

When I started going through extracted data I was a little bit baffled - I expected to find relatively large number of malicious scripts (after all I sourced all samples from VirusTotal). Out of 250 analyzed samples only approximately 20% turned out to be malicious:

At the time of writing only packaged versions of fontdrvhost.ps1 had a decent amount of AV detections. Rest of the files listed above were ignored by majority of AV engines.

That would be it for malicious scripts. So what made remaining 80% of the extracted files - or rather what interesting data was included there? This part turned out to be a real treasure trove of this small research project. Let’s start with some statistics (based on approximately 210 non-malicious samples):

Looking at above points it is clear that majority of these scripts were meant to remain internal to organizations in which they were developed. Unfortunately, the way how scripts are packaged does not seem to make things any better. I can see how a .NET binary obfuscated with SmartAssembly, containing IsDebuggerPresent string and decrypting data from its resource section during runtime can end up with a generic detections by multiple AV engines. Then it is just a short path to situation when someone uploads such ‘flagged’ binary to VirusTotal or one of the many online sandboxes.

It seems to make perfect sense to start monitoring networks and endpoints for presence of executables generated by SAPIEN Script Packager - both for malware detection and prevention of leakage of potentially sensitive data. It is worth noting that there are also other tools that can be used to package PowerShell scripts in a similar way: ISESteroids, Posh2Exe, PowerShell Pro Tools PSPack.exe.